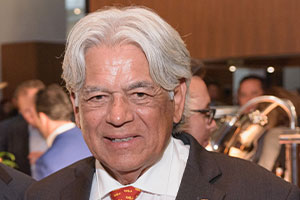 Alex Alonzo (JD 1974) remembers the moment when the idea of attending USC Gould crystallized in his mind. He was 20 years old sitting in his new Corvette. He had just been pulled over by the police. It was the fourth time he’d been stopped since buying the car a few months earlier. As before, the officer asked if the car was his, and then he demanded to see Alex’s driver’s license and registration.

Alex had been toying with the idea of law school for a while. An undergraduate accounting major at Long Beach State, he was interested in tax and real estate law. But this went deeper. “I realized that my crime was being a Mexican American driving a nice car. It was about me as a citizen. I wanted to know my legal rights.” When the officer told him he was free to go, Alex smiled: “Thank you. You have done me a favor. I’ve decided that I’m going to law school.”

With financial assistance made possible by generous alumni, Alex was able to fulfill his dream of a USC Gould education. Law school changed his life. Not only did it teach him about his rights as a citizen, but it prepared him for success in the world. At USC Gould, he discovered a community that challenged, supported, and elevated him. “I had the ability to interact with students of very high intelligence and motivation who also possessed impeccable values and character.”

After graduating, Alex launched his own firm in downtown San Jose. There, for nearly 50 years, he practiced as a tax attorney and CPA. His son Evan, who received his JD from New York University and is also a lawyer and CPA, now runs the business, which has allowed Alex to retire.

Real estate investing is another of Alex’s passions. He credits USC Gould for enabling him to excel at that too. It taught him how to negotiate an option to buy, how to prepare a sales contract, how to handle issues related to tenant leases, and how to invest successfully in adverse markets. His portfolio of properties includes investment properties in Silicon Valley, a vacation home in Lake Tahoe, and homes in Lake Arrowhead and La Jolla where he now spends most of his time.

Alex remains close to USC Gould. He supports the school philanthropically, tailgates with his former law school classmates at USC football games (he’s a diehard fan), and is the proud father of a USC Gould alumna—his daughter Alexis (JD 2006), who met her future husband, Chris Nilsen (JD 2007), in the law library. He’s a doting grandfather to the couple’s two young children and an aspiring world traveler with a long bucket list of places he wants to visit once the coronavirus pandemic subsides.

As Alex begins the next chapter of his life, he is mindful of the impact that USC Gould had on him. To show his gratitude, he recently decided to augment his commitment to the school by making a major pledge through his estate to the Dean’s Strategic Fund. He feels good about giving back, and he hopes to add to his legacy in the years ahead. As he says: “I will never forget that I was able to receive financial assistance that allowed me to attend law school and that the generosity of alumni who came before me made it possible. It is only appropriate that I do the same.”