Dave and Susan Howard — Ensuring Opportunities for the Future 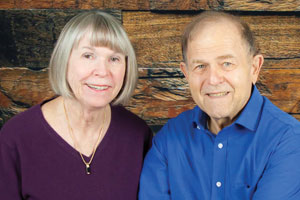 A little more than 50 years ago, Dave Howard JD ’70 was a struggling law student. He was married, had two children, little money and an uncertain future. But he was grateful to be at USC Gould, and for the scholarship support that enabled him to pursue his education. It’s something he kept in mind as he built a successful career as a tax law attorney advising clients across the globe.

Susan and I were very poor when we went to college. Were it not for the scholarship grants and financial aid the Law School provided, I would never have been able to finish my education.

This past summer Dave returned the favor. He and his wife Susan endowed a scholarship fund at USC Gould with a generous gift of $1 million. Pledged primarily through his estate, the Susan and David Howard Scholarship Fund will provide annual support to law students, with positive consideration for those who are the first in their family to graduate from college and attend professional school. The gift complements the support provided through the USC Gould School’s C. David Molina First-Generation Professionals Program, which was established in 2015 to provide mentorship, networking opportunities and informational events for first-generation students or students from lower-income backgrounds.

Dave’s USC ties run deep. His son Jonathan and late son Steve both graduated from USC Dornsife, Jonathan in 1991 (BA political science) and Steve in 1993 (BA political science and history). Dave himself is a triple Trojan. In addition to his JD degree, he has a BS (’66) from USC Marshall and an MPA (’70) from USC Price. But it was at Gould that he blossomed. It was a tumultuous time. The Vietnam War was raging, and within the Law School battles were being fought between an old guard of professors who believed that the curriculum ought to adhere strictly to well-established legal rules and doctrine and a new generation of legal theorists who advocated a more expansive approach.

Dave recalls the heady intellectual atmosphere of the place and the quirky personalities of the faculty. Of one professor, the influential legal scholar Richard Epstein, he tells the following anecdote:

By the end of the first class, he had memorized all of our names and faces. But when the cord to the voice amplifier he used for lectures came unplugged one day, he couldn’t figure out why the thing had stopped working or how to get it started again.

Dave credits Gould with opening his mind to new ways of thinking about the world and creative strategies for problem solving. These skills have served him well through the years, from his first job as an accounting associate in downtown Los Angeles to his days advising major corporate clients worldwide as a national partner of Deloitte LLP. Dave now operates his own boutique tax and business law practice in San Jose, California, serving closely held companies and their owners in Silicon Valley.

As Dave and Susan contemplate the future, they can take comfort in having recently completed their estate plan. One of their first goals was to create a college education fund for their grandchildren (by their son Jonathan), great grandchildren and nieces. With that accomplished, Dave’s thoughts turned to USC Gould. Law school changed his life, and he wanted to do something to ensure that bright, talented young people from modest upbringings like his own had the same opportunities he did. Susan, a graduate of UCLA Law School, agreed. And so they decided to endow a scholarship fund.

USC Gould is deeply thankful to Dave and Susan for their investment in its future and their commitment toward furthering the success of every law student.