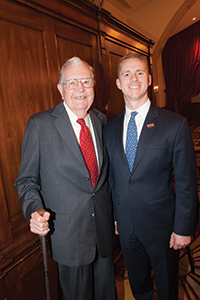 Charles “Chuck” G. Bakaly, Jr. JD ’52 credits USC Gould with preparing him to become one of the nation’s top labor lawyers and an Alternative Dispute Resolution (ADR) pioneer. “It taught me to think like a lawyer,” he says. “To think about the law and apply the law to the facts. That’s really what a lawyer does.”

Chuck recently created an endowed fund through his estate for Gould’s fast-growing ADR Program. The fund is named after Chuck and his late wife, Patty, who passed away last year. Chuck and Patty were married for more than 65 years.

Chuck began his career trying criminal cases as a First Lieutenant in the Judge Advocate General’s Corps. In 1956, at the urging of an old college friend, he applied and was hired for a job at the venerable Los Angeles firm of O’Melveny and Myers. Mentored by veteran trial lawyer Homer Mitchell, he became one of the nation’s foremost litigators in labor law representing some of the top companies in Southern California and arguing several cases before the United States Supreme Court.

“It was scary,” he says of his first appearance before the Court. He lost that case but won the next two. In NLRB v. Burns International Security Services Inc., he argued successfully that a successor corporate employer should not be bound by its predecessor’s collective bargaining agreement. It was an important decision for American business.

He was named a fellow of the prestigious American College of Trial Lawyers and recognized by Los Angeles Daily Journal as one of the 100 most influential attorneys in California.

While at O’Melveny, Chuck got involved in politics as a trusted advisor to Republican candidates at the municipal, state and federal level. There was even talk of him becoming solicitor general of the United States under President Gerald Ford.

Yet he was not afraid to reach across the aisle. Indeed, one of his best friends was his fellow law partner, Democratic Party stalwart Warren Christopher, Secretary of State under President Bill Clinton and godfather to Chuck’s youngest son.

After retiring from O’Melveny in 1994, Chuck began a second career as a mediator and arbitrator. “I believe that any dispute no matter how large or complex can be settled,” he once said, and he made good on these words for the next 18 years in leadership roles at Dispute Resolution Services, Inc., and Judicial Arbitration Mediation Services (JAMS).

Southern California has benefited immensely from Chuck’s civic contributions. He has served on the boards of Scripps College, Claremont University Center and Children’s Hospital of Los Angeles. But his greatest loyalty has been to USC and USC Gould. An emeritus member of the Gould Board of Councilors, Chuck has been steadfast in his support of the Law School.

Chase said this of his grandfather: “Besides his family, nothing means more to him than USC and the Law School.”