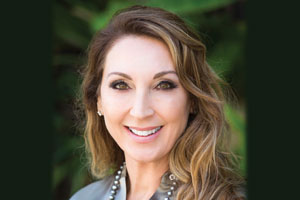 Annee Della Donna JD’88 has always been a fighter. She was five and playing with her two sisters at Penn Park in Los Angeles when she saw a man grab her mom’s purse and run. Leaving her stunned family behind, she took after the thief and chased him out of the park, down a hill, through a parking lot and onto a bridge where the man finally emptied the contents of the purse, threw it into the riverbed and jumped into a car.

“In my little 5-year-old brain, [this theft] was not right, and I was going to catch him,” she says. Looking back, the owner of a law office in Laguna Beach that specializes in personal injury and medical malpractice claims sees the purse incident as indicative for her career choice: “I have always run toward justice; I was supposed to be a lawyer.”

A first-generation professional who had to pay her way through college, she discovered her passion for law as a freshman at California State University, Long Beach, when a roommate sued her and a friend for failure to give 30 days’ notice. Della Donna, representing herself, lost in small claims court but won on appeal. Her defense impressed the appellate judge so much that he told her after the hearing she should go in to law school. Since she also enjoyed being a member of the college debate team under renowned coach Jack Howe and “pretty much everyone on the team wanted to be a lawyer,” law school soon became the obvious choice.

Della Donna found her law specialty almost coincidentally. She was an associate at Buchalter, Nemer, Fields & Younger and working on Supreme Court and Appellate Court briefings with fellow Gould alumnus and California Supreme Court Justice Marcus Kaufman (JD’56) when her assistant asked her to look at a complaint she and her husband wanted to file.

Della Donna offered to take the case as an attorney for another firm, Aitken, Aitken & Cohn. The lawsuit, which involved nine young people who allegedly had cancer caused by an electronic transformer in their office building, kicked off her career as a personal injury lawyer. “I started working with Wylie Aitken and had the most incredible career,” she says.

She has had two cases before the California Supreme Court this year. One just concluded with her obtaining a huge win for Innocence Rights of Orange County, reversing the kill zone theory that unconstitutionally targeted minorities and excessively sentenced them in attempted murder cases. Della Donna credits USC Gould with much of her success. She initially attended McGeorge Law School in Sacramento on a full scholarship, but it wasn’t the right fit so she transferred as a 2L to USC Gould. “It was such a different atmosphere,” she says. “The students were all helping each other be elevated, and the professors were kind.”

Her connections to USC reach into her family. Her husband, Eric Alcouloumre, did his residency and taught as a clinical professor at Keck Medical Center of USC; he is the son of a Trojan. Their older daughter, Eliana, graduated from the USC School of Cinematic Arts in 2017; their younger daughter, Shira, is a senior at the USC Dana and David Dornsife College of Letters, Arts and Sciences and on her way to becoming a human rights lawyer.

Della Donna’s family recently included USC in their estate plans. “I am so grateful to USC for accepting me into their law school and for the incredible education that I got,” she says. “I’ll never forget what they did for me.”