Linda and Sorrell Trope ’49 Give Back 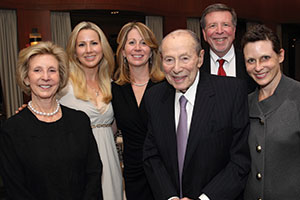 A pioneer in family law, Sorrell Trope, BA ’47, JD’49, considers his education at USC as “the nesting ground” from which his celebrated career grew. Growing up in Los Angeles, Sorrell attended John Burroughs Junior High School and Los Angeles High School and then went on to USC for college and law school.

Sorrell started as an undergraduate the Monday following his high school graduation in June 1944. Four and a half years later he had not only earned his bachelor’s degree, he had taught a course at the College of Letters, Arts and Sciences and earned his JD from the USC Law School. He passed the bar while still 21 and started his career in June 1949 as a practicing attorney.

“I had a wonderful experience at USC,” Sorrell recalls. “At the time it wasn’t sprawling, and you could drive down University Avenue. One of the first things that really impressed me was being introduced to University President Rufus von KleinSmid. From then on, whenever I saw him, he always knew who I was, called me by name and tipped his homburg hat. USC was like a home, and I loved the place.”

Sorrell was part of the first post-WWII Law School class, where he was the youngest by several years. “The pressure was immense, but the legal education was wonderfully balanced,” he recalls. “You got really practical training. And because it was small, like today, we had the opportunity to meet 1:1 with almost every professor.”

The shining light of the faculty at the time was William (Bill) Burby, a community property law expert who set the tone for legal education for 35 years at the Law School. Sorrell recalls other faculty members, Paul Jones, Robert Kingsley and Shelden Elliott, who went on to become dean in 1948.

During those years, Linda Trope recalls, lifetime friendships were made. Over the course of their 53 years together, their best friends have been people with whom Sorrell went to law school.

When Sorrell started practicing in 1949, the avenue for being hired by an established firm did not exist for Jewish attorneys. So he started in solo practice and built his law firm, Trope & Trope, where he was later joined by his brother, another USC Trojan. Thanks to a friend George Lovitt, who was a business manager for actors and actresses, and the Trojan family network, his practice in family law grew quickly.

“George introduced me to people in entertainment, and I let everyone I knew know that I was in practice and had my own office,” says Sorrell. “After three years, I had settled on family law and. With referrals and hard work, it soon got to the point that I had more entertainment people than I could count—culminating with Cary Grant with whom I worked the last 18 years of his life.”

The firm pioneered the team concept in marriage dissolution litigation and made its mark with multiple landmark decisions that shaped the course of California family law. Over the years the firm grew to more than 30 lawyers. Sorrell never “pre-qualified” a client or the client’s financial circumstances before accepting a case. This policy bore fruit in some unusual ways. A classic example was the occurrence of Cary Grant hiring Sorrell to represent him after being referred to him by a bed salesman who Sorrell represented.

Sorrell is a legend in the world of family law; and during the course of his 68-year career, other attorneys would come into courtrooms when he was trying a case. He earned Martindale-Hubbell’s prestigious “AV” rating, which signifies the highest level of professional excellence and ethical standards. In 1998 he received the Los Angeles County Spencer Brandeis Award for outstanding contribution to the practice of family law. And in 2013 he was the first recipient of the California State Bar Lifetime Achievement Award in Family Law.

Sorrell states, “When I started to practice, if you went to USC you were the crème de la crème. In Los Angeles it wasn’t Harvard or Yale, it was USC. And it did well by me, and I hope I’ve done well by it.”

Other members of their family are also Trojans: Sorrell’s brother, his son Michael (undergraduate degree from USC Dornsife), their daughter Alison (PhD at the School of Cinematic Arts; faculty at USC Annenberg), their daughter Laura (MBA at USC Marshall) and numerous nieces and nephews.

In addition, Sorrell has lent his expertise to other organizations throughout the community that benefit those who need legal assistance. A colleague of Harriet Buhai, Sorrell established the Trope and Trope/Harriet Buhai Family Law Fellowship in 1995, which enables a USC law student to work at the Harriet Buhai Center for Family Law which assists victims of domestic violence and families living in poverty. He received the USC Hall of Fame Award in 2012 (given annually to six people who graduated 50+ years ago and exemplify the ideals of the Trojan Family, recognizing their service to the University and the community) and the Zephyr M. Ramsey Award from the Buhai Center for his commitment to justice for all people.

Sorrell and Linda continue to support the Law School through annual gifts and their estate. “I feel that I would not have been what I am had I gone any place else to law school,” says Sorrell.