How to Build a Career 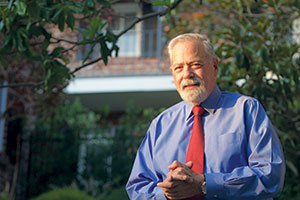 In December 1994, at the height of his career as a litigator, Richard Chernick ’70 made a bold move: He left a partnership with Gibson, Dunn & Crutcher in Los Angeles to become a full-time neutral with the American Arbitration Association. Switches like this were unheard of at the time, but Chernick was passionate about Alternative Dispute Resolution (ADR), and he had enough experience in the field to know what he was doing. And he is so grateful to the USC Gould School of Law for the trajectory of his career that he and his wife, Karla, have made legacy gifts to the law school totaling more than $2 million.

If there has been one force that shaped Chernick’s life as a lawyer — he is now the Vice President and Managing Director of the Arbitration Practice at JAMS — it is indeed the USC Gould School of Law. The modern ideas that defined USC Gould in the late 1960s and the people he met as a student and through the Trojan network played a major role in the trajectory of his career.

Two people stand out: there was Robert Warren ’56, who recruited Chernick straight out of law school to Gibson Dunn; and there was Dean Dorothy Nelson, who mentored Chernick from the beginning. When she heard during his first year that money was tight for him and his wife, Karla, she helped him obtain a scholarship. “Dorothy was instrumental in keeping me in law school,” Chernick says. But her influence went even further.

Chernick arrived at USC Gould at an exciting time. In 1967, the faculty was young and pursuing a new, interdisciplinary approach to law. Legal services programs such as the Western Center on Law and Poverty and the Reginald Heber Smith fellowships, which trained young lawyers to become legal service providers, were just taking off. And Nelson — who was the first woman to head up a major American law school — drove change in the field.

As a professor, she ignited Chernick’s fascination with a new topic that she taught and embraced: judicial administration. He helped her write a case book on the subject, while she got him a pro bono case with the California Judges Association. And judicial administration became one of his major practice areas. During his time at Gibson Dunn he represented judges and courts in matters ranging from salary disputes to court funding to independence of the judiciary issues. And he enjoyed the work.

“It was cutting edge, interesting and highly public,” he says.

And then there’s Chernick’s decades-long passion, ADR. Nelson, who was an early adopter of mediation because it tied neatly together with legal services and judicial administration, helped inspire that too. “Part of my motivation for getting into the field [of ADR] was knowing her and how she felt about it,” Chernick says. “Dorothy Nelson was way ahead of the curve, and I was drafting behind her.” Drafting or not, since Chernick was the one of only three attorneys at Gibson Dunn fluent in ADR, he got to work on a number of high-profile arbitrations, including eight cases in the 1980s at the Iran-United States Claims Tribunal in The Hague. By the end of 1994, Chernick had done so much work as a neutral that he knew he could make a career of it. “I’ve not had a bad day since,” he says.

Meanwhile, Chernick has mediated and arbitrated more than 1,000 cases. The issues before him have run the gamut from commercial to employment to entertainment. Many of his arbitrations are now tripartite, which he sees as the best and most reliable way to try a large, complex dispute. And overall, Chernick says, the cases have gotten “increasingly more interesting and increasingly larger and increasingly more challenging — with better and better lawyers.”

As he talks about his career in ADR, Chernick’s passion for the topic is palpable. (His voice quickens every time the conversation turns to arbitration.) But there’s something else that is equally present; it is his gratitude toward USC Gould. “I trace my career to USC, to Dorothy Nelson, from the legal services to judicial administration to ADR,” he says. “And while I’m responsible for what I did, I wouldn’t have been able to do any of that — or getting to Gibson Dunn — without having been at USC.”

Past chair of the Board of Councilors and current chair of the ADR Program Advisory Board (and a lecturer in law at USC Gould), he has stayed close to the law school throughout his career. In 2013 and in 2016, he and his wife, Karla — they have no children — made unrestricted legacy gifts to the law school. In 2022, Rich and Karla confirmed their estate commitment of $13 million to support the USC Gould Building endowment. Behind their generosity is, as Chernick says, “the idea of giving back for my career and for all the help that I got — I really feel a debt.”