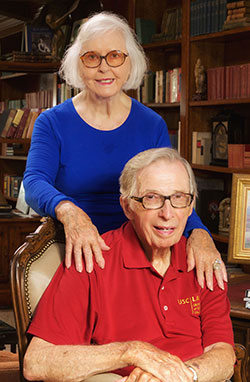 When June and Neil Ash ’50 began dating in the early 1990s, they bonded over the same things as many other couples: they both enjoyed concerts and museums, and they liked to travel. But they also had in common experiences and values. Both were past retirement age and had recently lost their first spouses when they met—and they shared a commitment to service and philanthropy.

June and Neil, who both grew up in the Los Angeles area and now live in Rancho Santa Fe, married in 1994. “We just hit it off,” she says.

Almost 25 years into their marriage, Neil’s devotion to the people, institutions and causes that have made his life meaningful remains unbroken, as does his faith-based mindset of service. He remembers feeling drawn to the law and to USC even before starting high school. “I was enthused with lawyers and their importance in society,” he says, “and there was never any interest in any other institution than the University of Southern California. USC was way above everybody else in L.A.”

The first in his immediate family to attend college, Neil enrolled at USC in 1945—after serving in World War II as an ROTC executive naval officer in the Pacific. Shortly after graduating from the law school in 1950 and sitting for the bar exam, he was called to active duty again—this time in the Korean War. Ordered to San Diego to catch a ship, he called a newspaper from the officer’s lounge to make sure he had passed the bar.

Neil, who served as a military lawyer until the war ended in 1953, never stopped caring about the armed forces and the well-being of its members. Thanks to his initiative and persistence, San Diego’s first USO airport center, a place where military and their families find support and services between flights, opened in 1990. When the time came for the center to expand, Neil and June wrote checks that made possible the opening in 2013 of the USO Neil Ash Airport Center. With 10,000 square feet of indoor space and almost as much outdoors, it is the largest such gathering spot worldwide.

After the Korean War, Neil returned to L.A. where he initially worked for a law firm and then joined Signal Oil and Gas as a corporate counsel. He did not enjoy private practice; the adversarial nature of the business wasn’t a good fit for his personality. “I was not overwhelmed with excitement,” he says. “People wanted happiness for themselves. But the other party would often be in real trouble. It would be desperate for them.”
Being a corporate lawyer was a whole different story. Remembering with gratitude the education that he received at USC Gould, Neil says that he always felt ideally qualified for his work at Signal. “It often meant looking to the future,” he says, “and helping the organization see which negatives might flow from any decision.”

In the decades that he spent with Signal—he helped facilitate the company’s 1985 merger with Allied but retired shortly after—Neil thrived on the opportunity to travel and to live abroad. He and his first wife, Elaine, spent two years in Brussels and three in Paris, from where Neil frequently caught flights to the Middle East. But what made his career most meaningful were the connections he made with his colleagues. “The people you work with in law are wonderful,” he says, referring especially to the long-time Signal CEO Forrest Shumway, who helped cultivate an atmosphere of service at the company. (A Stanford alumnus, Shumway also led major fundraising efforts for USC in the 1980s.)

Neil’s passion for USC and the law school has been a constant in his life. He served for a total of 11 years on the Board of Councilors at USC Gould, made sure to participate in locally held alumni meetings and decided against extending his international assignment in Europe because he missed college football too much. The Ashes now watch the games on TV, but June still raves about traveling with other Trojans from the Rancho Santa Fe area to L.A., Chicago and South Bend, Indiana, to root for USC. “It was great camaraderie,” she says. “Everybody would be at the hotel and then at the rallies and the dinners.”

Meanwhile, the Ashes have added their names to the roster of major donors to USC Gould. June, who long before her second marriage had established herself as a respected philanthropist, says that she joined Neil in giving to the law school because she knows how proud he is of being a USC alumnus. “I have enjoyed everything that I share with Neil,” she says, “and that’s why I thought that we should have this gift to USC.”