For Richard and Terry Hodge,
a USC Gould scholarship made all the difference 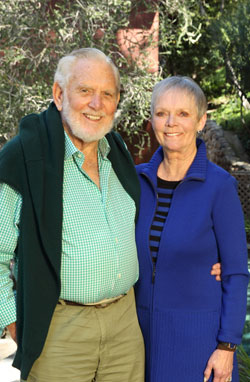 It was 1952; Richard Hodge had just completed his undergraduate studies at USC. A member in the Reserve Officer Training Corps, he was looking forward to starting his education at the USC Gould School of Law when the U.S. Air Force called him to active duty in the Korean War. But Hodge, who already had family responsibilities, was desperate to first earn his law degree. Hearing that a scholarship might help him delay active service, he asked USC Gould for support. It worked. The law school agreed to pay his full tuition for three years—Hodge’s academic record was excellent—and the Air Force deferred the call to active duty.

Fast forward to today. Neither Hodge ’55 nor his wife of 41 years, Terry, has forgotten what the scholarship meant for his career and their life together. They also remember how a USC Gould professor helped lay the foundation for Richard’s success as an attorney by connecting him with a thriving law firm that soon became his own. For both these reasons, Richard has always felt indebted to USC Gould.

In 2005, he and Terry decided to repay the law school with a philanthropic gift of more than $3 million. “When we first married,” Terry says, “I never thought we’d ever be in a position to make such a major gift. But Richard and I worked hard our whole marriage, and it was extremely gratifying that we accomplished the success we did and that we were able to give it back.”

The Hodges, who have four children from Richard’s previous marriages, are both Los Angeles natives. She comes from Sepulveda (now Northridge) in the San Fernando Valley. He grew up in Huntington Park, at the time a Norman Rockwell-type community just south of downtown L.A.

In high school Richard played shortstop on the baseball team and quarterback on the football team. But he also has an artistic side, and he says his dream was to “graduate, get on a steamer, go bum around the world, and try to write poetry.” He did the responsible thing instead: Even as a high school grad, he had a family to support—and so he decided on a career in law. This, he says, seemed “an interesting way to make a good living.”

At USC Gould, Richard’s sharp intellect and aptitude for the law caught the attention of Professor Richard Wicks, who introduced the student to an attorney in Beverly Hills, Charles Nichols. By the time his first year-end finals came around, Richard had not only lined up a summer job with Nichols but had also written for him a brief to the West Virginia Supreme Court on a major case.

He joined Nichols’ law office right after graduation, made partner within a year, and continued the practice after Nichols’ death in 1958. At its peak, Nichols & Hodge employed 15 to 20 lawyers plus support staff. Richard, who specialized in trial and appellate work in the civil area, says about Wicks: “There’d be no way I could repay him.”

Richard and Terry met when she became his office manager in the early 1970s. After their marriage, Terry turned to managing their investments—which meant being out of town two weeks of every month. She also helped raise two of Richard’s children who came to live with them. When they weren’t working, the Hodges traveled. They visited Australia, China, and Japan; chartered a yacht to explore the Tonga archipelago; went on safari in Tanzania and Kenya; and skied in Davos, Les Diablerets, and other Swiss resorts.

These days, they are close with their 11 grandchildren, who text and call or simply show up hungry at the couple’s home in Malibu. (One grandson, Trevar Kolodny, graduated from USC Gould in 2011.) Terry still does the investment work, and she again manages Richard’s office. “He won’t retire,” she says. “When an old client calls, he can’t say no.”

For all their success, the Hodges keep a low profile. Their home of four decades lies hidden in a small canyon off the Pacific Coast Highway and showcases nothing more than the couple’s desire for privacy. “We don’t like to be out front,” Terry says.

Looking back on his career, Richard says what satisfied him most was justifying people’s confidence in him. While his cases ran the gamut from business to marital, they all had one thing in common: To the client they felt important and personal. “It meant their livelihood, their way of life, the well-being of their children, their ambitions, their scientific aims,” he says. “It’s a heavy burden because you fear you have all this trust, and what if you fail?”