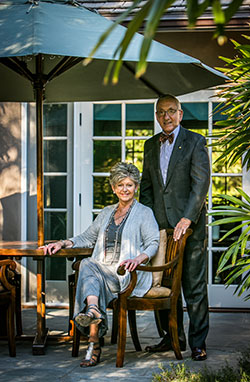 While he was dean at the law school, Scott Bice and his wife Barbara spent a lot of time courting potential major donors; they’d invite USC alumni over for dinner, take them to football games, and spend evenings at their homes. At one such invitation, the dean found a large check made out to USC Gould tucked underneath his plate. His host later told him: “Scott, I want you to know that after you left, I walked out onto my patio, looked up at the stars, and I just thought: This is the best day of my life.” The conversation confirmed for the Bices the notion that in philanthropy the gift is to the giver as much as it is to the cause.

Meanwhile, Scott and Barbara have become major law school donors in their own right. In 2000, after his retirement as dean, they decided to leave to USC Gould via their estate plan $1 million. The money will go to scholarships for academically qualified and financially deserving students.

Why be so generous? For the Bices, it’s about a generational compact—a family deal. Because tuition only partially covers the cost of a student’s education, the rest must come from philanthropy by people who, as Scott says, “went to the school, did well, and felt an obligation to give back.” That’s where he and Barbara identify. Realizing how much Scott’s education contributed to their success and happiness, they want future generations to have the same opportunity. “Why do you take care of your parents when they get old?” Scott asks. “Because they took care of you when you were young.”

Scott Bice, who is the Robert C. and Nanette T. Packard Professor of Law at USC Gould, was born a Trojan. Both his parents attended USC (as did his sister), and he remembers cheering for Troy at football games when he was six or seven. A native of San Marino, he says that he never seriously considered another university. He earned a business degree in 1965, graduated from USC Gould in 1968, and has spent almost his entire career there. (Right out of law school, he clerked for one year for Supreme Court Chief Justice Earl Warren; and in the late 1970s, he taught for one year at the University of Virginia.)

Scott discovered his passion for teaching as a boy scout camp counselor on Catalina Island. Every summer he’d watch the kids go in one week from homesick to happy and from non-swimmer to swimmer. To be part of that maturation process was rewarding—and it still is.

Now one of the longest-tenured faculty members at the law school, Scott says: “The great joy for me is watching the students grow. They come in not knowing how to make a legal argument or what the difference between a case and a statute is, and in the course of a semester you see them become fledgling lawyers. You see their confidence grow, and you see them develop their skills. It’s exhilarating.”

Different from Scott, Barbara is not a native Trojan. A graduate of the University of the Pacific, she adopted USC on her wedding day 48 years ago and has ever since reveled in its growth. “Being part of an institution and watching it evolve and just get better and better—it was like raising a family,” she says.

All the while that she was involved with the progress of USC, Barbara was pursuing a career in education and educational advancement, teaching and counseling at San Marino High School and then serving as the founding executive director of the San Marino Schools Foundation. More recently, she has served as the trustee of Scripps College.

When people ask her whether she and Scott have children (they don’t), she answers yes, about 7,000, which is roughly the number of students she and Scott must have taught. Barbara says: “I do feel that, in large part together, we have made an impact on a lot of kids’ lives, and that’s great. It’s been a wonderful ride.”

The dean’s years were without doubt the highlight of the ride. With guidance from their mentor Carl Franklin—a first-class fundraiser, who back then was USC’s vice president for legal affairs—the Bices pulled together as a team. They established and maintained relationships with prospective and existing donor couples, socialized, and made friends. The commitment paid off. From 1980 to 2000 the number of endowed chairs rose from one to 25.

But they also attended to the students and were, as one might say, involved parents. The annual backyard parties at their home in Pasadena to welcome the first-year class became legendary, and Scott continued to teach at least one course a year because he wanted the students to know him as a professor, not just as “the administrator in the corner office.” Those efforts, too, paid off. Over the years Scott married seven law school couples, and more than one Gould alum has named a child after him. For Scott and Barbara, USC is the gift that keeps on giving.