Guaranteed Income for Life, and Support for Three Good Causes 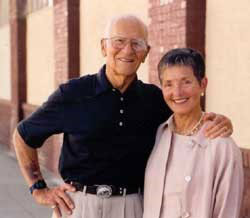 When John and Trudy Armer began exploring charitable-giving options, they had two priorities: setting up a gift annuity that would provide reliable income to them for the remainder of their lives and making sure the ultimate beneficiary of the annuity would use the funds to support causes they believe in.

USC met both requirements. And, thanks to Trudy Armer's commitment to programs that protect the well-being of women and children, the Law School's Domestic Violence Clinic is one of three USC programs that will benefit from the couple's generosity. The Armers' recent gift of a $760,000 gift annuity will be divided among the Law School; USC's Wrigley Institute, which studies environmental issues; and the School of Policy, Planning and Development, where John Armer earned a master of public administration degree in 1951.

Although neither John nor Trudy attended the Law School or studied law, they both were impressed with the Domestic Violence Clinic's efforts to assist battered women and their children. The clinic provides legal aid as well as access to social services resources for victims of domestic violence.

"We rely on the support of private donors and foundations to serve our clients," says USC Law School Dean Matthew L. Spitzer. "The Armers' gift goes a long way toward ensuring that we can continue to provide these critical services for years to come."

Trudy Armer has seen first-hand the value of such services. She volunteered for more than 20 years as a counselor at a community health clinic where she was involved with both the victims and perpetrators of domestic violence. She now works with children as a court-appointed special advocate (CASA) in Dependency Court. "It's impressive to see that 'SC places enough importance on this issue to designate a clinic to provide this assistance," she said.

After graduating in 1951, John Armer served as an instructor in USC's public administration program and launched a career in insurance and health care administration. In 1975 he founded what later became known as Managed Health Network (MHN), a subsidiary of HealthNet and the nation's first licensed HMO for mental health care. He later worked on a task force for the Reagan administration to develop a federal employee assistance program. In addition to health care, his interests now center on environmental causes.

The Armers were particularly pleased to be able to designate their gift to specific programs that address issues to which they are personally committed.

"I always said an annuity is as good as its guarantor," says Armer. "I think USC offers a good warranty. And being able to support good scholars who really dig into these issues we're concerned about was very attractive."